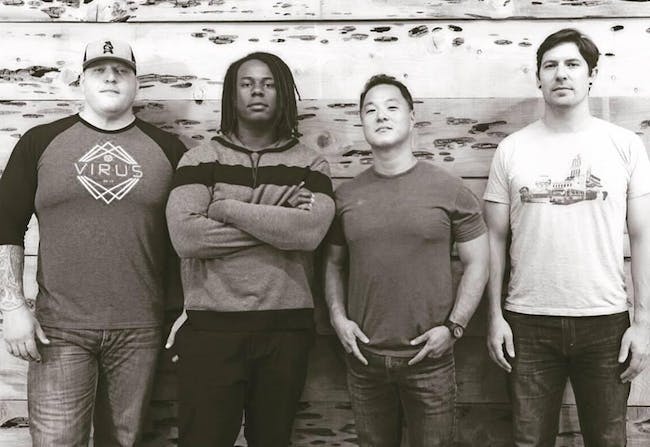 BENVENUE [pronounced, Ben-vuh-new] planted its roots in 2004 when Francis Blay (vocals) and Sid Slater (guitar) started writing songs together in Sid’s Berkeley, CA apartment, where they met while attending UC Berkeley, playing for Cal football. After graduation, Francis moved back home to LA and Sid followed, enrolling at MI (Musician’s Institute) while continuing to write music. They decided to move back to Nor Cal, and the band officially came together in 2008 when Cal teammate Erik ‘Erob’ Robertson (bass) and Sid’s childhood friend, Moon (drums) completed the quartet in 2008.

Self-Categorized as modern alternative melodic hard rock, Erik Cameron from Metalassault.com said “Benvenue don’t care for the local trends and their creative efforts are extremely rare and powerful.” Seguing from staggering riffs into soaring melodies without ever breaking stride, the band conjures hard-hitting grooves and anthem like hooks, paving the way for an undeniable sound. Musically, the band slowly started cultivating a style that was reminiscent of Incubus, with a political edge like Rage Against the Machine, while brandishing its own fire.

Most important to the band is their connection with their fans. “I really get the sense that Blay and the rest of Benvenue get actual joy from the music they play, it’s very apparent on these recordings and I am looking forward to catching these kids live if I get the chance.” J.S.L. – Real Rock Report

The band has been an established draw in California due to their powerful live shows, and they’ll be bringing it to the world soon. “There was no escaping the obvious fact that Benvenue brought the house down in Hollywood! The crowd went nuts!” trendymusicguide.com

More than simply delivering on their promises, the band will connect with listeners worldwide. Despite a brief hiatus, Benvenue has no musical expiration.