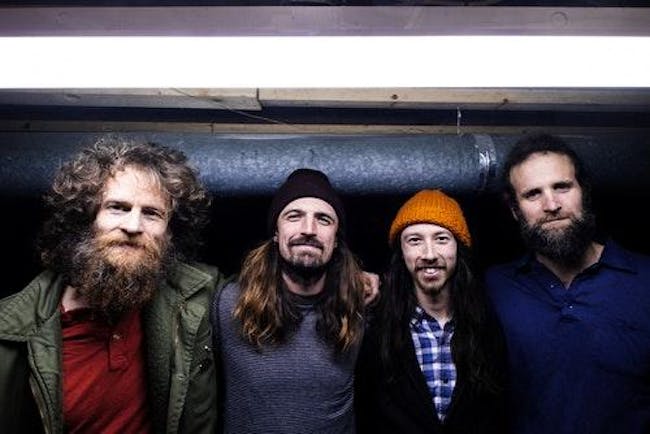 We teamed up with Calling All Crows' Here For The Music campaign to prevent sexual violence at shows and festivals through education and training. After hearing from over 850 music fans that have been sexually harassed or assaulted at shows and festivals across the US, we're doing our best to make sure this doesn't happen at our shows - and to better understand what's in place to ensure victims are supported should something like this happen.

It takes a certain type of musician to hop freight trains and barrel across the vastness of North America with his brother and cousin. Especially for an artist who, just years before, sold out Madison Square Garden for three consecutive nights. CHAD “CHADWICK” STOKES is anything but a typical rock star. So, there he was, wading across a river to escape the chasing railroad bulls and hanging in the different down and out jungles with other traveling folks. And in the end, after the three had finally reached the West Coast and were laying face down in the dirt at gunpoint care of the NSA, he says it was all well worth it.

“I had ridden the trains a little bit in the past for a day or two but I had never done it for weeks at a time,” Stokes says. “I discovered an America that I knew was out there but had limited experience with. There's all kinds of people out on the rails: people simply trying to get from point A to B, people running from whatever they left behind, people with nowhere else to go. You get to see a part of America that only the trains go through -- remote stretches without any sign of mankind." It was out on these long isolated stretches and in the inner city train yards that Stokes found the inspiration for his solo debut, titled SIMMERKANE II.

While riding the rails, Stokes made a designated stop so his band, State Radio, could play an anti-war concert at the Denver Coliseum with Rage Against The Machine. It is a DIY social consciousness that Stokes came to early in life - growing up as a pacifist, working in Zimbabwe after high school and eventually co-founding the Elias Fund, the Dispatch Foundation, and now Calling All Crows. In 2008, Stokes was honored as Humanitarian of the Year at the Boston Music Awards.

Simmerkane II, a proper follow-up to the State Radio EP (Simmerkane I), is a marked evolution in the musician-songwriter’s creative journey. Produced by John Dragonetti (of The Submarines), the album features background vocals from Carly Simon, Matt Embree (Rx Bandits), The White Buffalo, Blake Hazard (The Submarines), and Sierra Leone's Refugee All Stars. The sound is an engaging mix of Americana, country, folk and rock in the service of some undeniably evocative lyrics. The songs tell a loose narrative of travel, love and loss, like some re-imagined rock-n-roll odyssey.

The journey begins with “Adelaide,” a fuzzed-out melodic folk rocker containing the prophetic line, “We left Worcester with our boots and our bags - and America undressed herself in front of our eyes.” Next, listeners venture into the “Crowbar Hotel” to discover an underground world populated by hard luck outsiders: “We are sold to the highest bidder, we are down to our very last crumb - May we invite ourselves to dinner, ‘cause we might just have to make a run.” The song “Back To The Races,” has Stokes reflecting on past mistakes and longing for the childhood farm while still seduced by the excitement of the journey and a new love. The symphonic rock-n-roll charges ahead before dropping down for the intimate lyrical refrain “Back to the races - and on with the day.”

The two-disc deluxe package includes three bonus tracks with Sierra Leone’s Refugee All Stars, a musical ensemble of refugees from Sierra Leone’s 1991 civil war. Stokes, who did humanitarian work in Zimbabwe as a youth, has been a longtime fan of the All Stars. The tracks include a lilting African-tinged folk song called “Coffee And Wine,” a reflective reggae track titled, “All My Possessions (Ode To Troy)” and “Don’t Have You” – a heartfelt ballad that eventually erupts in celebration with the All Stars’ backing vocals and percussions carrying the weight of their troubled history and eventual transcendence. “It was such an honor to work with the All Stars,” Stokes explains. “The songs we did were kind of folk songs and one reggae song, so they were a bit out of their element trying to adapt to the folky farm kid and his songs. But you can hear their history in their singing and playing and it adds this amazing power to the songs.”

Simmerkane II is an ambitious album about discovery, loss and moving on. What begun as a journey across an unseen America becomes a moving musical tribute to the resilience of the human heart. “The album was initially inspired by the freight train trip with my brother and that vast underworld that exists out there,” Stokes explains. “But then it’s also about growing up on the farm and losing loved ones; a young man learning about life.” In his spare time, Stokes can still be found hopping trains with his beloved travel companion, Lefty.

Colorado singer-songwriter, Daniel Rodriguez, turns to his acoustic guitar for memorable, melodic hooks to accompany his poetic and contemplative folk songs. Boulder Weekly refers to Rodriguez’s voice as “a timeless voice, deep and hearty, weathered but comforting.” Daniel and his four-piece band are touring this Fall across the west coast of the United States.

With over a decade under his belt as one of the founding members and lead songwriters of the transcendental folk band, Elephant Revival, Rodriguez is well-versed in the Americana tour circuit. Before going on hiatus, after their third headlining Red Rocks show in May 2018, Elephant Revival had released six albums and performed countless shows and festivals across the nation as well as overseas.

Needing to fill the musical void that might have become following Elephant Revival’s hiatus announcement, Rodriguez immediately headed out on tour as a solo artist. He’s been chosen as main support for bands and shared stages with such acts as Jim James, Gregory Alan Isakov, The California Honeydrops, Mandolin Orange, Josh Ritter, Fruition and John Craigie in addition to being added to numerous festivals like Northwest String Summit, Lyons Folk Fest, Jam Cruise and WinterWonderGrass.

Daniel Rodriguez released his debut collection of songs as an EP titled Your Heart The Stars The Milky Way on February 15, 2019.