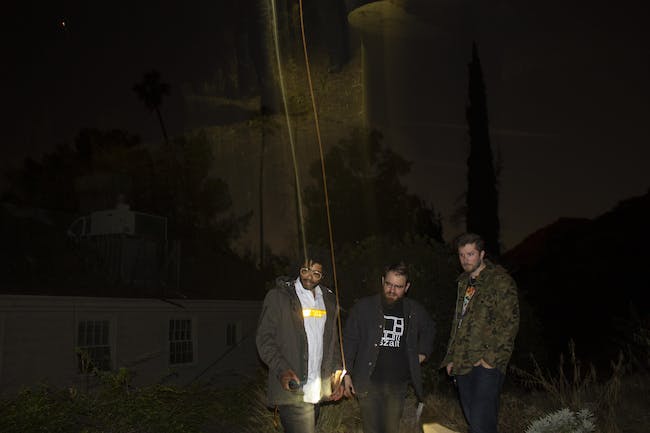 “clipping. makes party music for the club you wish you hadn’t gone to, the car you don’t remember getting in, and the streets you don’t feel safe on; are phantom broadcasts bleeding into Power 106 as you drive out of range; are twenty different rappers looking into one broken mirror, talking to themselves all at once; are classic west coast rap music out of the tradition where sounding different wasn’t cause for fear” (Press release for Midcity, September 2012).  Things have changed for clipping. In the time since the above was written. The band found that listeners were more ready for them than they’d first imagined. Before 2013’s Midcity, the trio of rapper Daveed Diggs and producers Jonathan Snipes and William Hutson did not expect to find an audience for their abrasive brand of rap music. But since the formation of clipping. and the release of their debut album, the field of commercial music enlarged ever so slightly, making room again for noisier, more adventurous elements in electronic production. Examples of this have been incremental, mere baby steps, so far. And despite clipping.’s insistence that they’re really just making rap— not noise-rap, industrial-rap, or any other mashup genre— their music might be more sonically challenging than that of the punkish rap rockers, lo-fi bedroom producers, and street goth hybridists they’ve been lumped with so far. Sure clipping. sound fucked up, but for them, sounding that way isn’t a criticism of anything. It doesn’t mean they hate, or are out to destroy rap that doesn’t sound like theirs. The band makes its music in a genuine attempt to contribute productively to the form, to offer what they can to the genre they love. clipping. see themselves as respectfully following the path first explored by rap’s pioneering sound designers like The Bomb Squad and Dr. Dre— those producers who were inventing a new language as they worked, and especially those who smuggled industrial soundscapes and musique-concrète techniques into mainstream music and popularized a sound that felt as tough as the stories its lyrics told.

In fact, they don’t see themselves as doing anything too different from the various trajectories of experimentation in recent rap production, and believe the genre is reaching out in many different directions at once. clipping. imagine their work as simply one method among many— no more or less avant-garde than the stark, unrelenting soundscapes coming out of Chicago, the psychedelic blur of contemporary Atlanta rap, the ultra-minimal party clap currently dominating the West Coast, or the off-kilter post-backpack sound of their label mates Shabazz Palaces. Rap music is getting weird again, and clipping. are proud to be around to witness and participate.

Lyrically, clipping.’s music attempts to reshuffle and repeat accepted rap scenarios, while eliminating a traditional single-point perspective. Diggs’s writing is heavily citational, like a rough-edged collage, gluing together half-glimpsed images and misremembered references, many of which might feel familiar, and some of which assuredly do not. But even while he consumes and regurgitates established styles, his self-erasure is incomplete; Diggs’s dense, often motormouthed flow remains wholly his own.

The band formed in 2009. Initially conceived as a remix project, Jonathan Snipes and William Hutson began composing new beats to accompany mainstream and gangster rap acapellas. These early attempts paired noise and power-electronics inspired tracks with existing vocals by commercial rap artists. This was done simply to amuse each other and the duo earned very few fans. clipping. began in earnest in 2010, when rapper Daveed Diggs joined the group. The three members had known each other for many years— Diggs and Hutson since elementary school, and Snipes since college. Despite this, clipping. is their first project as a trio, building on their long relationship and on their shared obsession with rap, and with music’s outer limits.

Individually, the members are known outside of the group for their extra-curricular artistic projects. Diggs is a stage actor, while Snipes composes music for film, and Hutson is an established noise music artist. Snipes and Hutson have collaborated on many projects, including the score to the documentary Room 237, which was released by IFC in 2013.

In February 2013, clipping. released their debut album, Midcity, on their website. The project was created entirely in-house, with the trio writing, producing, engineering, mixing and mastering all of the material themselves. There was no budget, no outside promotion, no hype-machine, no blog or label interest. In fact, clipping. had no expectation that anyone would bother listening to the album, let alone enjoy it. Nevertheless, reactions were largely positive— despite the uncompromising nature of the production, and its obfuscatory lyrical content— and within five month’s of Midcity’s release, clipping. signed a deal with Sub Pop Records. CLPPNG, the band’s label debut, was written and recorded between February and October of 2013. Although clipping.’s working methods were pretty much the same as they were for Midcity (only passing off the mixing and mastering to outside professionals) CLPPNG is a much more ambitious project. The album features guest verses from some of the band’s strongest influences, including Gangsta Boo (formerly of Three 6 Mafia, and currently of Da Mafia 6ix), Guce (longtime Bay Area mainstay, member of Bullys Wit Fullys), King T (all-around West Coast gangster rap legend, founder of the Likwit Crew, and mentor to Xzibit and Tha Alkaholiks). For the first single from the album, “Work Work”,  clipping. joined up with Cocc Pistol Cree, a newcomer from Compton best known for her appearance on DJ Mustard’s mixtape Ketchup, and her song ‘Lady Killa.’

In addition to the featured guests, CLPPNG boasts a more varied sonic palette than its predecessor. The new album attempts to stretch the band’s experimental sounds to fit a wider emotional range— Midcity had anger and aggression figured out, but how can clipping.’s harsh electronics fit into a club track, or a slow jam, or a song to strip to? Relying heavily on musique-concrète techniques, the trio built many of the tracks out of field recordings and acoustic sounds. The beat for “Tonight (featuring Gangsta Boo)” evokes a nasty, late night encounter with its fleshy slaps and squishy, biological noises, while “Dream” utilizes natural ambiences to create a bleary, hypnagogic mis-en-scène. But the band hasn’t gone soft, not by a long shot. The album’s intro is likely the most uncompromisingly brutal piece of music they’ve yet recorded, and “Or Die (featuring Guce)” is as mean as anything on Midcity. CLPPNG is an album that demonstrates the variety of sounds available when the ‘rules’ of a genre are willfully questioned.

Cartel Madras is a Calgary-based hip-hop sensation shaking things up across the city, country and industry.

Hailing from South India, sisters Contra (Priya Ramesh) and Eboshi (Bhagya Ramesh) are rappers now being hailed by fans and eager listeners-on as they develop varying narratives for coloured woman and deliver them in explosive and captivating ways. Sexuality, identity, freedom, race, colour, and gender some of the recurring themes that listeners can expect to explore through their music.

Guaranteed to bring the party, their signature sound fuses the rap stylings of the South and trap and filters it through a strong female, though not necessarily feminine, voice.

Always catchy and more than sometimes provocative, they invite you to join the Cartel.