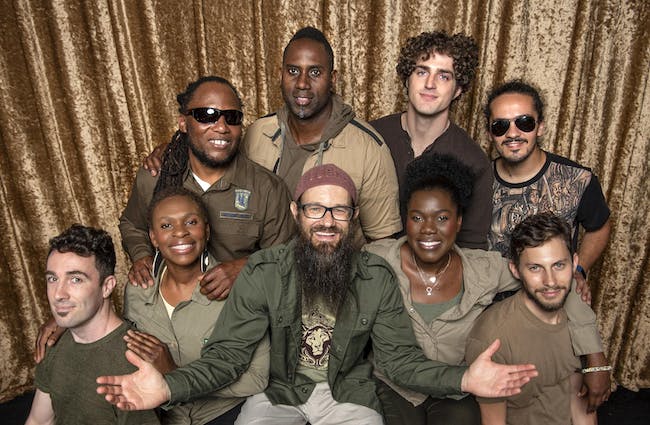 First formed in 1998 GROUNDATION returned in 2018 after a 3 year hiatus; debuting accomplished new members, brand new music and that true to form improvisational Reggae/Jazz experience. A unique sound fans have enjoyed for two decades on the biggest stages all over the world. Their new album “The Next Generation” which won Reggae.fr’s “Best Roots Album” from over 16,000 press, radio, and fans around the world has struck a chord as a groundbreaking musical ahievement. Since the album’s release in October 2018 the group has performed across the globe from countries such as USA, Italy, France, Uk, Brazil, and Argentina.

Harrison Stafford, founding member, lead singer and guitarist for the group was excited to get back to creating this unique and dynamic sound which allows musical freedom, exploration and creativity like no other form. Having embarked on several musical projects over the years Groundation remains his first love.

Harrison remarks that “Groundation provides a musical vessel that allows me to create and perform the music that I hear in my head”. The sound comes in part from Harrison’s early childhood hearing Duke Ellington and Miles Davis from his grandfather and father who where both Jazz performers. He formalized his musical education at Sonoma State University (SSU) completing a degree in Jazz Performance, where he honed his skills for composing, arranging and producing. After completion Harrison went on to teach The History of Reggae Music at SSU before embarking on his own musical journey. A journey that would by and large comprise to date, of 9 studio albums and tours to over 40 countries across the globe with Groundation.

Carrying on Groundation’s rich history and the high standards, that were set by the musicians before; honoring what was done and pushing further still. A new generation takes the reins, you will find onstage:

This nine-piece band creates an altogether unique reggae sound, featuring swirling, jazz/funk inspired horns, stout Latin and African based poly-rhythmics, and soulful harmony vocals. Their concerts utilize live improvisation, in classic jazz fashion, and are renowned for their high energy, communion-type atmosphere. Fans can expect to hear classic like ‘Picture on the wall’ and “Babylon Rule Dem” along with new songs from their album “The Next Generation.”

The Delirians are the heavy hitters of Californias ever growing traditional ska and reggae scene. Based out of East Los Angeles, founder Angel Salgado(vox,guitar) strives to keep that vintage reggae sound alive. With tracks like "Walkie Talkie" and "Leave This Town" you'll be sure to hear reflections of that vintage 60's era sound, adding their own flavour to create a genuinely unique sound.

But it doesn't stop there. The Delirians will also keep you skanking with original ska tunes and keep you grooving to some heavy rocksteady. With the approval of artists such as Pat Kelly, Stranger Cole, The Jamaicans, the Pioneers (just to name a few), The Delirians are thee band to keep an eye out for.