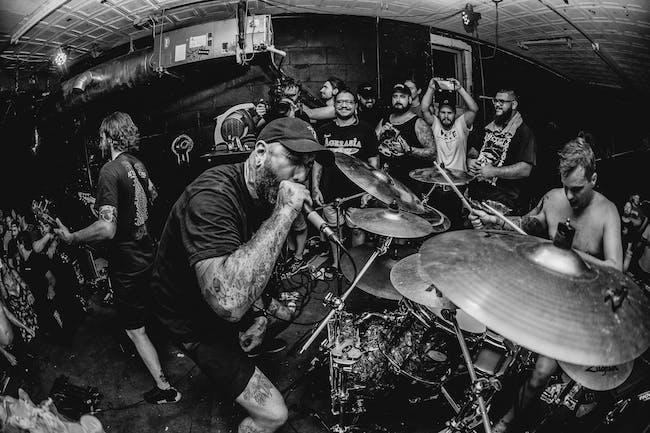 Unfortunately, due to the health concerns within our community, The Acacia Strain show on 3/16 is being cancelled. Although most of our affected shows are being postponed, there was not a feasible reschedule date for The Unlikely Candidates. As a small business, being closed for the foreseeable future could have a serious impact on our ability to bring live music to the East Bay. We are asking all customers who are financially able to exchange these tickets for similarly priced tickets to a different show. Feel free to respond to this email with any show you would like to attend and we switch your tickets over. We greatly appreciate your support. Stay safe & stay healthy.

The Acacia Strain is an American metalcore band originally from Chicopee, Massachusetts.

The Acacia Strain is currently signed to Rise Records.[1] In total, the group have released eight full-length albums.

Forming in 2001, The Acacia strain was started by high school friends Vincent Bennett, Christopher Daniele, Ben Abert. Looking to bring their current band Septic Orgasm to the next level of technicality, they brought in their mutual friend, Karrie Whitfield, and high school student Daniel "DL" Laskiewicz to play Bass and guitar respectively. The band began playing local shows around Massachusetts and recorded their demo in 2001.

After DL received a shoulder injury while playing high school football, Vincent asked friend and current Blood Has Been Shed guitarist, Daniel Daponde, to fill in on guitar while DL healed from his injury. Daniel brought a heavier and more technical aspect to the band, so when DL returned they asked Daniel to stay, thus forming the unusual three guitar lineup.

After countless local shows, including quite a few in Vincent's mother's basement, the band was approached by Toby Dutkiewicz, who ran Devil's Head records, if they would join his label. The band agreed and recording for their debut album "...and Life is Very Long" began in 2002 at Zing recording studio in Westfield, Massachusetts with Adam Dutkiewicz and Jim Fogarty at the helm with Jim doing most of the tracking.

with ROTTING OUT, CHAMBER, & FUMING MOUTH