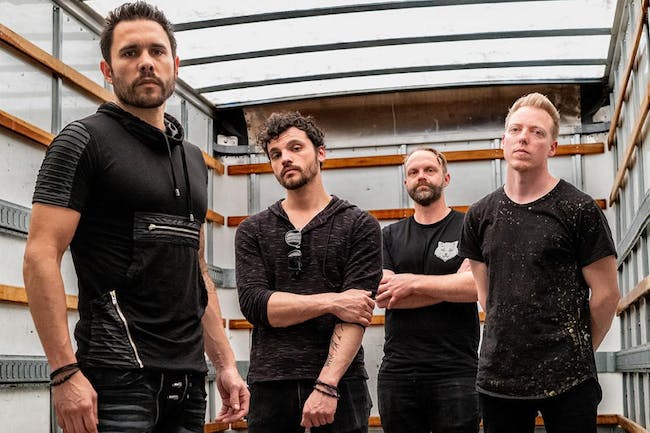 Gripping vocals, shredding lyrics, and a strangely optimistic melancholy are the meat and potatoes of Cantell’s music. A percussive, rock band capable of leaving emo fans shaking, punkers with their jaws on the floor, housewives quivering, and metal kids feeling hip for a second or two. Cantell is as pure and emotional as it gets. With thick layers of instrumentation fronted by Randy Markham, in-your-face voice and a tender ear for sophisticated pop poignancy, Cantell is able to combine the smarts of metal with the boldness of punk. All while crafting tightly produced, hook-laden rock, appealing to indie, folk, and pop fans alike. To put it another way, Cantell takes you to a time when the party has ended. The premises has been vacated, and you’re left to clean up the mess, wondering how you ended up in this situation, reminiscing of how you didn’t get the girl at the party, and how life doesn’t seem to be coming up roses at the moment. Though, even with a dark, moody atmosphere looming overhead, a bit of sunshine cracks through the clouds and promises that tomorrow might, just maybe, be a bit better and the day after that may find you shaking the dust off and picking yourself right back up. Here is a band that hides the optimism, but has plenty of it. This is what you always crave after the dark times seem to be setting in. -Cantell is Randy Markham (Marlon Rando) vocals , Daniel (DAP) guitars, Fuji (Rick) bass and Eric (Salvo) drums.

The heavy, tight and polished sound of STIMULI has been compared to Alice in Chains, Black Sabbath, Soundgarden, Tool, Rush, and Nirvana. The individual and collective history of the band is just as varied and multi-faceted as their music. Comprised of seasoned musicians from around the world (drummer Cole Andrew is from Australia), STIMULI is a collage of three very strong-willed personalities who, like most productive collaborations, happen to have chemistry and work well together.

"Our music contains a strong emotional intensity with personal, social, and philosophical messages about the human experience,” explains guitarist/vocalist Jimmy Tomahawk. “Although there is an undeniably serious disposition in the band's message, as individuals, we don’t take ourselves very seriously at all - satire, slapstick humor and wisecracks are the norm when we are together. It's a bit of a collective Jekyll & Hyde scenario, really. We try to remind ourselves that the initial spark of passion and the joy of playing music that caused us to pick up our instruments in the first place is why we do this!"

The formation of STIMULI began following the split of Bay Area rock band Yeibichai, the brainchild of Tomahawk and Hake. When Tomahawk came across a video series of Cole Andrew demonstrating his drumming prowess he reached out and they began to jam. Tomahawk couldn't imagine any other bass player but Tai in the room with the sounds that he and Cole were creating. With the lineup in place STIMULI opened up shop in their new studio space at the fabled Soundwave Studios in Oakland. It was here that STIMULI became a band and their deep friendship and musical bond was solidified. In 2014, the band released their self-titled STIMULI EP with a different vocalist, recorded at the legendary Fantasy Studios in Berkeley.

In early 2017 STIMULI found themselves at a crossroads. Feeling a shift in band’s lineup, now as a trio with Tomahawk singing and writing lyrics for a new batch of songs, things suddenly felt new, vivified, and stronger among the three of them. In just a few short months the band was in the studio tracking drums and bass for a new album. They decided to go back to the idyllic Russian River Studios on the Ingels Ranch in Talmage, California, where Tomahawk and Hake had previously recorded the Yeibichai record. Ken Ingels, the owner of the studio, was extremely helpful, and they enlisted Andrew Miller to engineer and mix the album.

For the artwork and album layout, the creation an enigmatic image was sought that represented the sound and emotional space that the band found themselves in. The trio had their eyes photographed and then overlaid the irises so the colors merge and overlap in a familiar geometric pattern. In areas where the irises unite and overlap something that does not exist on it's own is created - just like the music and themes on the album.

The band generated buzz when they released their debut single and music video for the album’s title track, “They Are We” and after much anticipation, STIMULI released their first official full-length album titled THEY ARE WE on August 18, 2018. The critically acclaimed album is a winding 11-track explosion of the trio's dense, ambitious, and fiercely original sound. Now that the album is released worldwide, an unprecedented sense of optimism and joy is felt with the music they are creating as a unit. Along with the new fan base that the album has garnered, audiences are reciprocating the energy that is conveyed at their live shows with great fervor. With much more to come from this exciting new Bay Area rock band, it would appear that STIMULI are just getting started!